It’s All Coming Here, to Oklahoma

Bailey and Stefan first met at the Church of Open Arms, where the pastor was Bailey’s mom, and Stefan’s boss. It was around that time that Great Plains Tar Sands Resistance (GPTSR) started meeting at the church.

Bailey had grown up holding signs at rallies, but while her peers were getting rowdy and excited about activism, she says she was somewhat burnt out on it. But the threat of the Keystone XL pipeline (KXL) reinvigorated her, and before too long she found herself locked to heavy equipment, stalling TransCanada’s effort to build the pipeline that now ships tar sands through her state.

Stefan had been involved in direct action before, and had been arrested protesting Guantanamo Bay up in Chicago, but getting involved with GPTSR was his first introduction into environmental organizing. When I ask what inspired him to take direct action for the first time, he blushes and looks over at Bailey.

“I guess I can’t help but show my stripes,” he says to her.

Then, to me, he says, ““Well, I’m really into the whole Jesus thing. I don’t know, I’ve always been inspired by Jesus and the Gospels, especially the gospel of Luke, in which Jesus is militant, condemns rich people, turns tables over, gets snitched on. It’s been very inspiring to me and feels relevant to current resistance struggles.”

Stefan tells me that fighting the KXL was an interesting opportunity because, unlike most environmental issues, people were already paying attention. It was controversial, but at least it wasn’t an uphill battle trying to build awareness. Pretty soon, Stefan too was locked to a machine.

The path to arrest had been paved for them by Elisabeth Leja, an 75 year old woman who was the first to lock herself to equipment in protest of the KXL pipeline. Over bagels and coffee, Elisabeth tells me that she got riled up  listening to an NPR program and ended up visiting a website where she pushed a button saying she was willing to be arrested. Now she will talk in great depth about the increased risk of cancer faced by Fort Chipewyan First Nations people as a result of tar sands extraction.

In her trial statement, Elisabeth writes that downriver from the tar sands extraction in Alberta, health officials have confirmed that there are higher rates of cancer in Fort Chipewyan, an area with about 80,000 inhabitants.  In the oil town of Port Arthur, Texas, the last stop of the Keystone pipeline’s proposed path, cancer rates are 15 % higher than the rest of Texas.

“I had never been an activist before, never,” she tells me. “I just had come to the conclusion, watching television and reading and whatnot, I just thought ‘this is ridiculous. These people are out of control.’ And I decided someone had to take hold of the situation. So I thought decided that well, everyone should. But in order to say that everyone should you have to do it yourself, so I did it myself.”

Elisabeth tells me that activists from somewhere, she wasn’t sure where, had contacted her, asking her if she was willing to chain herself to equipment.

“They only used nicknames, they did not use their real names, and I don’t have any phone numbers of anybody’s and together we decided that since I was the only one who had volunteered that I would go ahead and do it.”

Elisabeth wore her cutest hat, hoping that it and her old age would keep the cops from using pepper spray against her, and used bicycle chains to lock herself to machinery very early in the morning. She curled up with her book, “The Swallows of Kabul”, and kept construction from moving forward for three hours. The adrenaline from the excitement of the action didn’t wear off over the six hours she spent in jail. 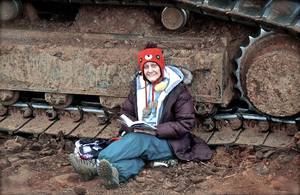 Bailey and Stefan were two of the 32 activists that followed Elisabeth. Locking down was important because it helped gain the trust of other organizers and helped facilitate working relationships that they needed to fight TransCanada.

In Bailey and Stefan’s living room, I ask if they know whatever happened to Oklahoma’s “glitter terrorists”, a couple of anti-KXL organizers who were charged with bio-terrorism when they unfurled a banner, showering a little bit of excess glitter onto the ground at the public Devon Energy building. The CEO of Devon Energy sits on the board of TransCanada.

Bailey shoots him a look. “That was us.”

Bailey and Stefan were arrested for unfurling the banner, which read “The Odds Are Never In Our Favor” and depicted a mocking jay carrying a monkey-wrench, a reference to the Hunger Games. FOIA requests have demonstrated that the Oklahoma State Police had instructions from the Joint Terror Task Force to try to book environmental activists protesting the KXL on terrorism charges, and so Bailey and Stefan were initially arrested for “bio-terrorism”, which was later downgraded to what the cops called “terrorism hoax”. 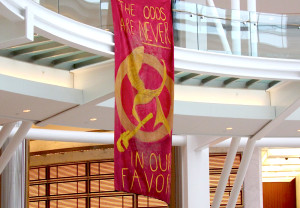 Charges have not been confirmed by the District Attorney, but the statute of limitations is three years. This is often used as a silencing tactic used by the state to keep activists from continuing resistance.

***
In Oklahoma, as in Texas, the Keystone XL is already pumping tar sands. Most of the people who initiated GPTSR have left to pursue other things, leaving Oklahoma activists to deal with the aftermath.

“It’s definitely overwhelming,” Stefan tells me. “Once KXL was in the ground, Enbridge started constructing the Flanagan South pipeline from the northeast, and then the Seaway was going southeast, and the Pony Express was coming in from the Bakken shale, so there are three times as many pipelines going through, as well as the fracking boom. I mean, there’s so much going on, and we just put so much into fighting KXL. People quit their jobs, moved into squats, lived in the forest to fight the KXL and it’s like, do we just try the same thing again? We’re going to get our asses kicked, and this time no one has ever heard of any of these projects.”

Bailey is a little more upbeat. She tells me that while there is a lot of disappointment, there’s also a lot of energy and excitement for what comes next.

“We can’t just attack all the pipelines. ALL pipelines go through Cushing, Oklahoma. It’s all coming here. It’s all hitting us. We’re trying to step back, reflect on what we learned, start building connections, and start pushing back against a dominant culture that needs to change. It’s not something immediate we can fight back against, it’s not something we can go chain ourselves to. It’s more complicated… It’s easy to get lost in your own world, and view your group of friends or community as the whole world. We need to form relationships and push back against isolationism. We need to take another look at where and how our actions fit within a broader context. Which means taking another look at who our allies are and who our enemies are.”