This strain of corn was lost in the 1877 Trail of Tears which forced the Ponca tribe from Nebraska into Oklahoma. It was revived thanks to Amos Hinton, the Director of Agriculture for the Ponca Tribe who dedicated himself to tracking down the last remaining handful of original Ponca corn seeds. This weekend he and his younger brother brought the seeds to the Tanderup farm to try to stop the construction of the Keystone XL pipeline through land that once belonged to the Ponca tribe. 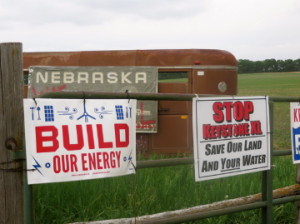 Amos Hinton made his living for most of his life as a pipeline welder, and so he says he supports many pipelines, but he thinks the Keystone XL will not benefit Americans and that it will jeopardize soil and water.

“We do not know the catastrophic effects that could come from this project,” he says.

The event was attended by several other landowners who worry that the pipeline presents a threat to their livestock, the water supply, their soil, and the climate. One such landowner, Tom Genung, says that getting involved in the fight against the Keystone XL pipeline has changed his life, inspiring him to get arrested in Washington DC and introducing him to many people who are now his close friends.

“Things like today. Planting corn by hand with the great Ponca Nation. Who would ever have imagined that that would happen? You know? It wasn’t part of my life plan,” Genung says. He thinks this pipeline will be denied, but he still worries that other pipelines will continue to ship dirty tar sands from Canada.

Planting continued despite the rain, and now the sacred red Ponca corn is planted on the Tanderup farm.