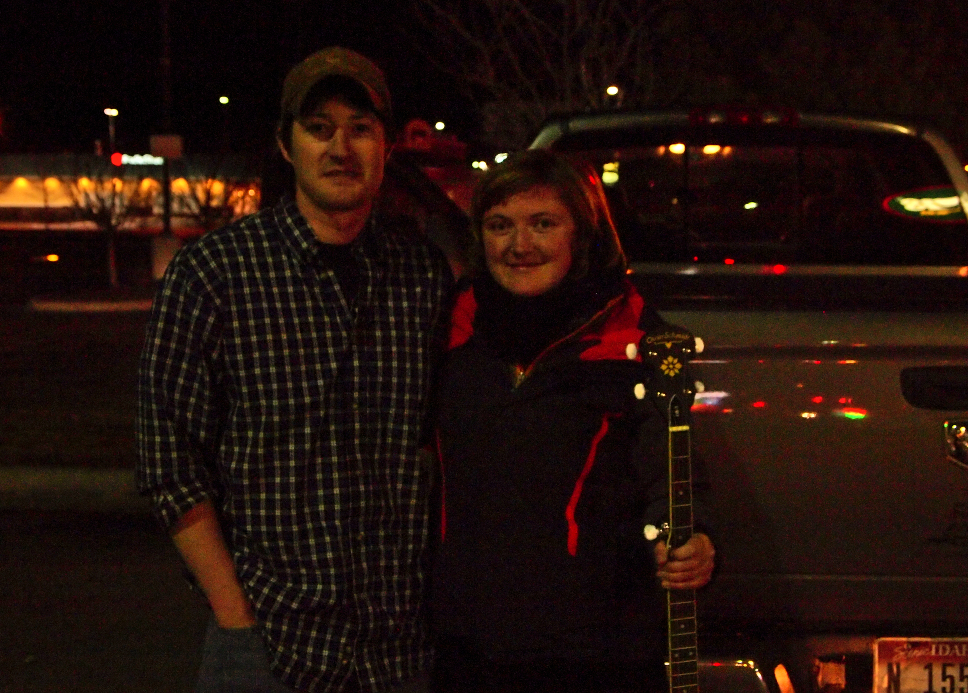 Cleve, the Bakken Shale fracking rig worker who picked us up in Kooskia.

Our ride out of rural Idaho into Missoula, Montana was a guy named Cleve, I think about my age or a little older, headed to work in a massive diesel truck to a fracking rig in North Dakota.

When he found us we were getting desperate. We had already been through a hail storm, it was getting dark and cold, and we had decided to walk into town if we were passed by just one more car going our direction.

When I saw his car pass us in the opposite direction, recognizing it from earlier from the knock of the engine, I was saying, mocking the internal monologue of the driver, “hey guys, I realized my terrible mistake and came back for you!”

As it turned out, I was right — he actually drove past us the first time before stopping, re-arranging his gear in the back seat to make room, turning around on the highway, and coming back for us.

We’ve been a little circumspect when talking about what we’re doing with the people who pick us up, because you never know what peoples’ politics are going to be, but as soon as he told us where he was going, there was no point in beating around the bush. We told him we were working on a journalism project covering the movement that would very much like to put him out of a job.

What followed was probably the most interesting conversation we’ve had with anyone on this trip so far.

The story of how he came to the work was one that I think is probably common — he was working as a bricklayer in Lewiston, Idaho before the housing market collapse, and after the work dried up, he started hearing stories from friends about the money to be made working out in the oil fields.

“I’m a laborer,” he said. “I’ve got to be doing something with my hands. So I put in, and a few weeks later I was out in the oil fields.”*

He recognizes that the oil industry damages both the environment and the social fabric of communities where extraction is taking place (he called Williston, North Dakota a “zoo” and was glad not to be working there), but said there are a raft of misconceptions that he finds unfair.

He pointed out how much of a boon oil development has been to small communities in North Dakota. Wages have gone way up (although, it has to be pointed out, so have housing prices), such that a night stocker at Wal Mart starts out at something like $18 an hour. Business owners and people who own their mineral rights have benefited greatly.

He told us the story of one person who misread the first check they received from the oil company who set up on his property.

“He takes his check to the bank and the banker asked him what he wants to do with it, and he says ‘Just cash it.’ The banker says ‘are you sure?’ He thought it was for $600. He re-reads it and realizes it was for $60,000. For a month.” And this was after years of barely scraping by as a farmer on that same land.

He did say that the benefits for people working regular 9-5 service industry jobs, aside from the modest wage increases, aren’t great. Lesley and I pointed out that the people benefiting the most are people who already owned capital, e.g. the rich are just getting richer, and he seemed to agree with that but didn’t find anything particularly unfair about it.

He also said the industry gets a bad rap as far as the impact extraction has on the environment. He said the amount of emphasis on safety on the work site, and the sensitivity to safety issues, is far beyond what most people who’ve never seen a work site in an oil field realize.

He said that one company got panicked after killing two birds with their drilling equipment and put up nets to avoid killing a third, mainly because they didn’t want to deal with the bad publicity.

“By contrast”, he said, “look at how many birds get killed by windmills every year.”

Cleve spent a lot of time contrasting his own work to the environmental impacts of windmills, which in his mind are worse in many respects, from their effects on wildlife to their actual physical footprint. He said fracking rigs don’t take up nearly as much space or impact the landscape as much.

His thoughts on climate change were interesting, and similar to the thoughts many people have in the U.S.** He said it was undeniable that the climate was changing, that anybody could see that, but that he doubted whether humans were the cause. “The climate’s always been changing”, he said, “and I think it’s a little arrogant to believe that humans could have any control over that.”

He elaborated — “I think of the Earth as a whole organism. And it’s always adapted. It will adapt to these changes, too.”

We told him what repeated scientific studies have said — that the probability of seeing the observed changes in the climate from natural causes alone is very, very small. And we said that we agreed with him, that the planet will survive, but that life on Earth as we know it, and especially human civilization, might not.

He seemed to agree, but wasn’t sure there was anything we could do. And he referred to this position as “realism”. It was a common refrain of his.

“I believe we need to find something better than oil, but in the meantime,realistically…“

“I think it would be better if society worked differently than it does, butrealistically…“

And it’s worth pointing out that this is the refrain of somebody who’s making a great deal of money from the way the system is currently set up. Cleve was a reasonable guy, obviously intelligent, thoughtful, and generous at least to the extent that he gave two people he mostly disagreed with a free ride in a truck that couldn’t have been cheap to operate.

But I don’t agree with his assessment of “realism”. I think “realism” means confronting the fact that we are on track to destroy the ability of humans to survive on this planet within existent lifetimes, and that the scale of suffering we will experience on the way there is unimaginable. And “realism” means disrupting that outcome every way you can.

But the system itself limits how much we’re able to do that. After all, there we were, accepting a ride*** from a guy driving a massive and mostly empty diesel truck more than 800 miles to work, and we were incredibly grateful he was making the trip.

*I’m quoting from memory here — there may be some paraphrasing. Sorry Cleve!

**Anthropogenic climate change is not in any way scientifically controversial. The public opinion picture is pretty interesting.

***Part of our decision to hitch hike, aside from keeping the overhead low, was that we felt that was one of the best ways to get to the out-of-the-way places where this story lives without piling on more carbon by renting a car or flying. It also means we can usually avoid giving our own money to oil companies, at least directly. But more on this later.